THE CLIMATE MARCH IN HELSINKI: TIME IS NOW! – TIINA JUNNO
Skip to content 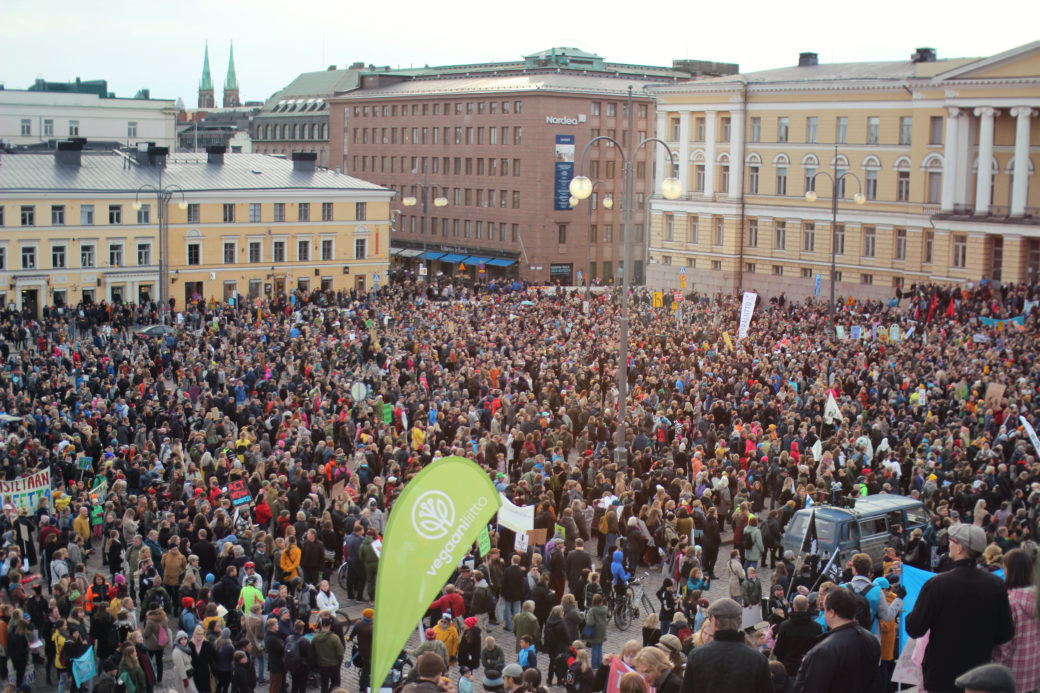 People gathering at the Senate Square before the march. The photo was taken with solar powered camera. Photo: Tiina Junno

For several years now, I have followed the news with both fear and hope. Will we be too late or will we be just in time to stop the consequences of climate change from getting out of hand? What kind of a planet will we be leaving for the future generations? I have felt that as an ordinary citizen, my chances to make a significant impact are somewhat limited. But what I can do, is to demand the decision-makers to act now. In order to put pressure on the politicians, a group of organisations arranged a climate march in Helsinki on Saturday 20th October 2018.

In the last few years, the world has seen the effects of climate change up, close and personal. Stronger hurricanes and typhoons, wild fires, heat waves, droughts and alarming amounts of algae are here to stay. And these are only some of the effects. Suddenly, the climate change and its impacts are everywhere: in the news, in social media discussions and at home when you sit down to your evening supper. The wake-up call has been sounding for years but now the alarm is getting harder and harder to ignore.

When the Paris Agreement was forged in the 2015 Climate Summit, the United Nations asked the Intergovernmental Panel on Climate Change (IPCC) to examine what the goal of keeping temperature at 1.5 C would mean. According to the panel’s report, it is still possible to keep the temperature below 1.5 C but it will be challenging. To reach this goal, every single country in the world will have to commit to prompt climate action in order to lessen the impacts of climate change. The panel was very strict about this. Even the rise of a half a degree to 2 C would be a significantly worse scenario for the world. And if we keep going like we are now, the temperature will rise to 3 C which is something the world cannot handle. Therefore, the action against the effects of climate change must be taken now and not tomorrow, next year or in five years time.

On Saturday last week, the day of the march was finally here. I and thousands of other people took part in the climate march and demanded climate justice, ecosystem protection, support for the increase of renewable energies and energy conservation, environmental education to all school levels, support for the climate action of the poorest countries, and a just transition.

The weather was crisp and beautiful. The crowd gathered at the Senate Square in front of the Helsinki Cathedral before the march. The sight of all those people attending was almost emotional. I was happy to be there with others who were worried about the state of our climate.

The young Swedish climate activist, Greta Thunberg, 15, who has been in a school strike for climate since August this year, gave a moving speech before the march and urged decision-makers to act before its too late. She pointed out that the climate crisis has already been solved: we have the facts and the solutions. Now we only need to open our eyes and change ourselves.

Soon after Greta’s speech, the march proceeded from the Senate Square to the Parliament House. In front of the Parliament House, we heard speeches by Kaisa Kosonen, the Climate Policy Advisor at Greenpeace Nordic, Petra Laiti, the chair of Finnish Sámi Youth Organization Suoma Sámi Nuorat, and the politicians from eight parliamentary parties. Petra Laiti’s speech was very impressive. She reminded us all that as one of indigenous peoples in the Arctic region, the Sámi people are in the frontline of climate change. They have the best knowhow of their land so they should have a place in the decision-making when it comes to making sustainable decisions about the arctic nature. I hope that her speech made as powerful impression on the decision-makers on the scene as it did on me and on many others listening to it.

Before the march ended, I had an inspiring discussion with one other participant about what we ourselves can do for our planet. We agreed that using renewable energy, avoiding food waste, being vegans or vegetarians, and setting an example ourselves are some of the things we can do. On Saturday, there were many of us setting an example. The reports say that approximately 10 000 people participated in the march. It was the biggest climate march that had ever taken place in Finland. The aerial photos I saw online later that day looked amazing. I felt empowered with a renewed sense of hope for the future. I hope that the knowledge that so many people are worried about climate and our future and the future of our children will accelerate the actions we as a nation have to take to do our part in keeping the temperature below 1.5 C.