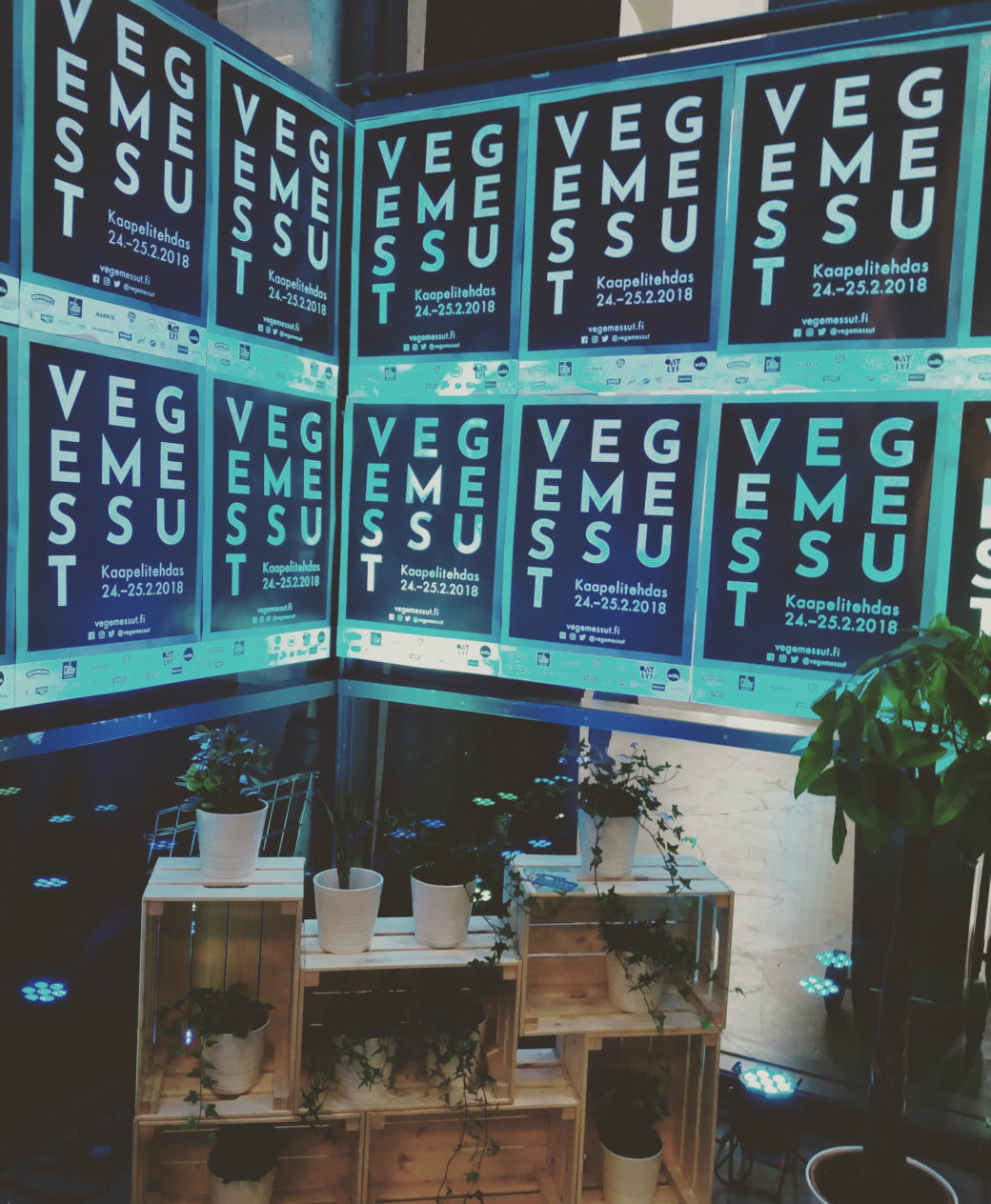 Despite being a vegetarian, I have never been to a food event that concentrates solely on plant-based food. Therefore, it was quite expected that the Finnish vegan fair, Vegemessut, caught my attention. The wonderful range of vegan food exhibitors, animal welfare advocates and organisations, vegan fitness exhibitors, climate info, and clothing lines and shops housed the industrial-feeling cultural centre Kaapelitehdas on 24-25 February 2018 and attracted over 8000 people. I went there to explore new vegan foods, environmental sustainability, and atmosphere. And see what the first-ever VegAwards was about.

The weather was chilly and temperatures were low on Sunday 25th as I made my way towards Kaapelitehdas which is a home for dance theatres, galleries, art schools, museums, companies and bands in the Ruoholahti district in Helsinki. As I got closer, I bumped into a friend and talked with her for a few minutes in the cold winter air. She was already leaving the fair and said that a lot of fun things were waiting for me inside. I hadn’t been exactly sure what to expect so my interest was piqued.

As I entered the Merikaapelihalli area where the fair was held, I was met with smiles and happy-looking people. The atmosphere felt warm and excited. This was my first food fair where the food was my kind of food. Still, I was stunned (in a good way!) by the smiles I saw and the relaxed atmosphere that just floated towards me. So I picked up a broschure, stepped inside the hall, and went to explore the origin of all those smiles.

I like to make sustainable choices when I eat. I often try new things but I haven’t tasted every plant-based product on the market so I found the food exhibitors very exciting. The downstairs space of the venue was full of vegan food producers, sellers and importers who offered samples of their products. I really wasn’t expecting all of that vegan food galore. No wonder everyone was smiling. I also got to talk about sustainability a bit when I was tasting foods but the crowd was so dense and the exhibitors so busy that I didn’t have a chance to be as thorough as I would have wanted to be.

The wellbeing of animals is connected to veganism so there were several animal rights advocates at the fair. The tables of Animalia, Oikeutta eläimille and Eläinsuojelukeskus Tuulispää shared information and sold support products. Tuulispää also had vegan cupcakes to sell. They looked delicious and seemed to be popular among the fair-goers. Now I also know where some of the smiles originated from.

At lunch time, I met a friend and explored the upstairs restaurant world that housed a Planti café and food vendors such as Bali Brunch Helsinki, Rulla and Hey Poke as well as the ice cream roll maker Spiro. As expected, everything was vegan. Choosing what to eat was difficult since all the plates on peoples’ hands looked wonderful. We ended up with a vegan plate ”Gado Gado” from Indonesian street food restaurant Bali Brunch Helsinki. Such a delicious treat!

Vegemessut had an interesting stage programme that ranged from topics such as the future of food and climate change to food innovations, sports, nutrition and ethics of food. As our interest in Global Senses lies on environmental sustainability, I was a little disappointed that I couldn’t make it on Saturday when Ville Lähde, a researcher from BIOS research unit, talked about hunger and climate change. Luckily, his talk was available online.

Lähde talked about the future of food, climate change and the changes we should make in food production in order to fight and to adapt to climate change as well as to keep hunger at bay. He pointed out how people often say that if we all went vegetarian or vegan, it would solve climate change or world food problem. Reducing meat production is essential in fighting climate change and adapting to it but it is not all. Lähde suggested that we should think about what kind of world we live in and begin to see how we can change things from where we are now.

Reducing poverty and inequality, trading fairly, practising fair politics, and making changes in the food production all play their part in staving off hunger in the future. What was new to me was the idea of diversifying food production, i.e growing 10 or 20 plant species in the future farms instead of the 3-4 species that are produced at one farm at the moment. Even if some crops do not thrive, the others do.

Lähde also mentioned that agroecology is exploring how to increase the amount of organic matter in the soil, fight erosion, and improve the land’s water-holding capacity simultaneously. Water-holding capacity and fighting erosion are important to food production. Increasing the amount of organic matter in the soil in turn means that fields would become carbon sinks that absorb more carbon than they release as CO2. This way food production could start reducing carbon dioxide in the atmosphere and cause negative emissions. If all the three above-mentioned things worked, they could help both in the fight against climate change and in staving off hunger.

On Sunday afternoon, I placed myself near the stage to watch the first-ever VegAwards in Finland. The idea was to celebrate the change in food culture by awarding the pioneers on this front. The best vegan brands, companies, products, and movers and shakers were voted by us, the public.

The winners were Kolmen Kaverin Jäätelö (The Best Brand & The Best Ice Cream), Oatly‘s iKaffe (The Best Milk), Härkis, a Finnish invention made of Finnish fava beans (The Best Plant-Based Protein), Vihis by HoviRuoka, a vegan pie (The Best Prepared Food), Vöner, a vegan version of kebab meat (The Best Newcomer), Vegaanituotteet.net, a site that keeps track of vegan products in Finland and shares information (The Best Social Media), and Piia Anttonen & Eläinsuojelukeskus Tuulispää (The Special Category Award) for the relentless work done for the wellbeing of animals.

I think some of the winners were quite obvious since their products are very much loved. The audience seemed to agree judging by the cheering and happy smiles. It was great to see plant-based products awarded and to know that their success is not showing signs of slowing down.

All in all, Vegemessut was a really nice event. As a first-timer, I found the atmosphere great, and people, both the audience and the exhibitors, very forthcoming and enthusiastic. If I could make one wish, it would be to have an even larger slot in the programme for environmental sustainability of food production and everything that goes with it. Next year, perhaps?

The organisers of Vegemessut are promising something interesting happening in August too. The keywords are ”good food” and ”summer Helsinki”. I’ll be waiting.