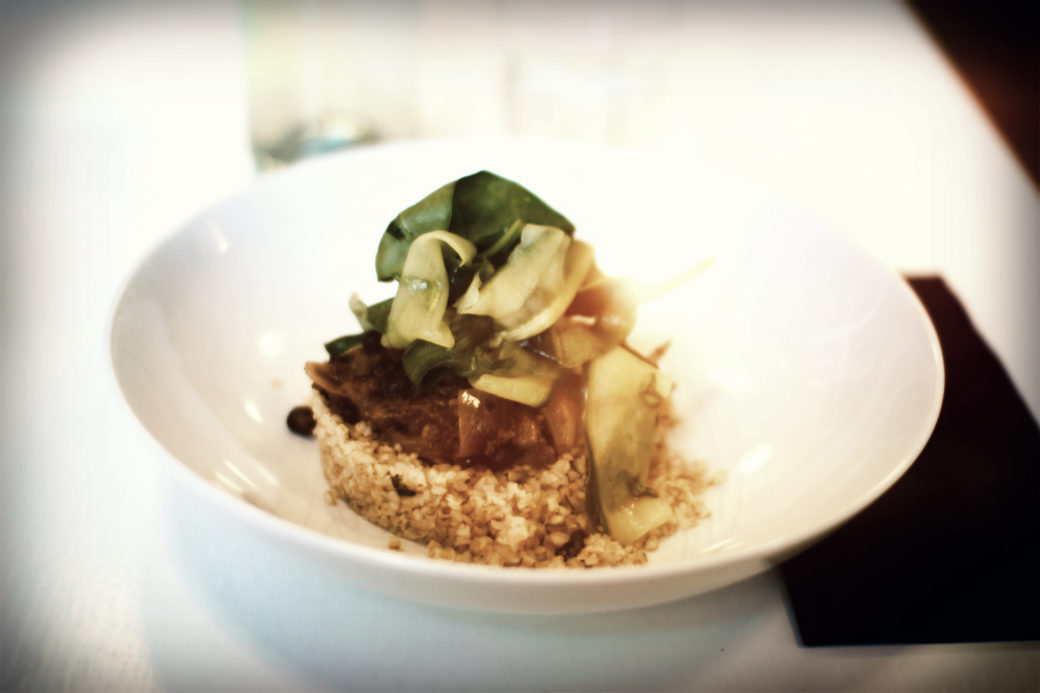 Can you make gourmet meals out of food waste? Eating at a restaurant where lunch is made of surplus food is a new experience to many. I explored this uncharted territory at Loop, the first food waste restaurant in Finland. If you are a person who lives sustainably but hasn’t really thought about the effects of food waste, you might be in for a surprise – and guilty conscience – when you find out that there is more food in the world than ever before but massive amounts of it still go to waste, overload our environment and accelerate climate change.

Food waste or surplus food is perfectly good edible food that ends up in trash. In grocery stores, it is not just food that has passed best-before dates but also weird-shaped and funny-looking vegetables, a little darkened fruits, or ingredients that consumers do no want. In Helsinki, these unpopular foods are turned into delicious restaurant meals at food waste restaurant Loop.

Loop is located in the idyllic, parklike surroundings of the former Lapinlahti Hospital in Helsinki. It came about as a part of a circular economy project, From Waste to Taste, that fights against climate change and food waste. The restaurant was created with the help of a crowdfunding campaign and it opened its doors in 2016. Since then it has turned surplus food into gourmet lunches, dinners and brunches.

Every morning From Waste to Taste project’s Food Resque car makes rounds at grocery stores in the neighbourhood and collects surplus food for Loop restaurant. Approximately 70-80% of the saved food is delivered to food charities. The meals at Loop are prepared by professional cooks, but following the aims of From Waste to Taste project, the restaurant also provides job opportunities for young people, refugees and others with difficulties in finding a job.

The restaurant offers lunch on weekdays, dinner on Friday nights and brunch on weekends. Some of the brunches are theme brunches. And here’s some good news to vegans: A vegan brunch has a permanent spot on the first and the third weekends of the month.

When I visited Loop, I chose a lunch called Waste du Jour. It includes a soup, a salad buffet, a warm main course and a dessert with coffee or tea. The other lunch choice is Soup du Jour which is the same except it does not include the warm main course. After paying for lunch and getting my food reservation number, I sat down and started with the salad buffet and soup.

The buffet had several choices. You could choose to have purely green salad, cabbage and cauliflower salad or pasta salad with tomatoes and pepper. Or you could have it all. This was my first food waste lunch so I decided to taste everything and have some bread on the side. All the salads as well as the bread were delicious. The pureed carrot soup brought the desired warmth with its gentle taste free of spice overload. I would guess that pureed soups are easier to make when you have limited amount of ingredients but I am hoping to get a chance to taste different kinds of soups on my next visits to Loop.

The main course for the day was chili sin carne with spicy bulgur. The food was beautifully laid out with bulgur on the bottom and cucumber strips resembling fettucine with basil leaves on top. It was fantastic. Onions, tomatoes and black beans infused with spices together with mild cucumber strips were a lovely balanced combination. Before the main course was delivered to the table, the waitress asked me if I was ready for it to be brought to me from the kitchen. Being taken care of in such a way was a nice touch to my lunch experience.

After indulging myself with my chili sin carne, I was curious to find out what was next. The dessert of the day was a pear pie, small croissants with jam, and a collection of fruits that could be enjoyed with tea or coffee. The pie and croissants were delightful and the fruits were fresh and not at all something that might be considered food waste. For beverage I chose tea since I am an afternoon tea and a morning coffee kind of person. On my visit, the tea served was black tea. There might be different sort of teas on different dates depending on the ingredients available. I hope one of my future visits to Loop will include green tea which is my favourite of all teas.

While eating my lunch at Loop, I thought about food waste. In Finland, grocery stores throw away more than 65 million kilos of food per year and the whole food chain produces as much as 400-500 million kilos of food waste. These numbers are rather breathtaking. And the burden on the environment is huge since a lot of resources throughout the production chain have already been invested in making food that now goes to waste.

Food waste has an impact on climate change which isn’t necessarily thought about often. Natural Resources Institute Finland reveals that yearly food wastage of Finnish households corresponds to the emissions of approximately 100 000 passenger cars. That is one massive carbon footprint made of food.

One could argue that all the food that is destined to go to waste should be transported to the countries that suffer from famine. The thought is wonderful, of course, but the reality is not as simple as that. A recent article on the Canadian newspaper, The Globe and Mail, points out that it is often countries facing war that suffer from famine. When countries are not at peace, it may be impossible to produce food amidst fighting or food aid may be blocked or sold by someone who benefits from it monetarily.

It is not easy to reduce food waste when more food than can be consumed is produced every year. Some food waste is inevitable but there are still heaps of food being unnecessarily thrown away. The connection between climate change and food waste should also be more clear. On a smaller scale, using surplus food to create new kinds of restaurant experiences and going on in an adventure as a customer to those restaurants are a couple of ways to make a difference.

On my daily life I often buy food that is in danger of getting thrown to the trash and use everything in my kitchen as best as I can. I know what I am eating and how old my food is. But eating in a food waste restaurant was a different experience. Before my lunch at Loop I got asked by a friend if I was sure I wasn’t going to get sick. It’s food waste after all. And I haven’t selected the ingredients myself as I do at home. I was not worried: I was thrilled! Yes, finally I am going to see and taste what Loop is all about. I am probably more adventurous with foods that have passed best-before dates all by myself than any restaurant so I was just happy to go and discover what Loop had to offer. And what I’ve learned from From Waste to Taste, only the ingredients that are suitable for eating will be used in Loop which is the same for any restaurant.

The food was delicious. I was completely taken by my lunch and woved to return. I hope Loop will attract new customers and just by its existence encourage people to rethink the way they see food waste and its significance for climate change. And did the food help me to have a better conscience compared to other lunches I’ve had? Well, yes it did. I also found myself thinking about my next grocery store run and how I would raid the store of red-labelled foods that are about to go to waste.

Ps. The newest from From Waste to Taste project is a crowdfunding campaign for Wasted beer that will be made from surplus bread. Check it out!